DISCLAIMER – I do not own the character of Arno Dorian, or of Elise.  They belong to the rightful owners of the Assassin’s Creed franchise at Ubisoft 🙂  The above image was found on Flickr.

Based on Arno’s speech at the end of Assassin’s Creed – Unity. 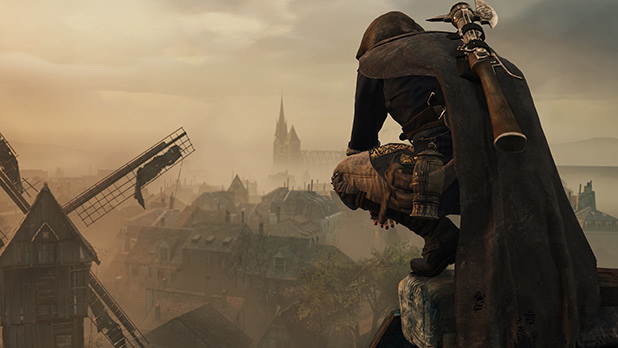 Such an unforgiving season, but withholding such dangerous beauty, that coats the earth white, and the cobblestones glitter.

The chill of her bite, that rises us early in the morning, and reminds us that we are very much alive another day.

The streets, vibrant with life once again, citizens filing along the pavements in the returned civil manner.  The soft whirr of the carriage wheels as they go about the town, accompanied by the crack of hooves, and the gentle nicker of old bay mares.

Children, darting from one side to another, their squeals of exhilaration as they tag each other, oblivious to the scolding of the adults whose paths they obstruct.

Life returns to the streets of France once again.

But at a greater cost than one may have originally assumed.

In a scene of proposed tranquillity, a new tragedy is bestowed upon the shoulders of an unfortunate soul.

A death rocks the personal world, but barely tremors the one in which we reside.

The spilling of blood will release a torrent of agony, yet will leave merely a stain upon the written figures of society.

We wonder, as only humans can wonder, what brought the notion of war into being? What spurred one man to draw blood from another, to inflict the worst of suffering upon those who loved him?

To leave his children oblivious to the love of a father?

To grow, bitter, to one day exact revenge for a stolen childhood, and restart the cycle?

We must defend our right to be human, to have our choices, and to live the lives we dream of living – not follow blindly in the path of a leader, like cattle to the slaughter.

Revolution, it seems, was not quite the way to follow this.

Correct, in the sense that we fought for this right, and never felt quite so united for one cause before.

Wrong, in the opposing sense that the bloodshed became too difficult to handle.  Men and women began to crave the liquid existence of others, like some form of horrific mystical beast.

It seems as though we humans will never truly comprehend what it is to be at war.

We argue.  We raise our weapons.  We draw blood.  We mourn.  Resolve.  We fight again.

It seems that war can never truly be brought to an end.

But why must we declare conflict on such a grand scale, for the sake of bickering leaders?  Why did our predecessors follow so blindly, to be told that they were fighting for freedom, when it was in fact profit?

We know not our forefathers, only their principles.

I have never known such pain to rest within my chest, and to reside for an eternity within my conscience.

My dear Elise, snatched from me in the prime of youth, when her eyes had just sparkled, and her smile defined the worthiness of living.

She would have loved to have seen how peaceful these streets have become.  To see the people walk freely and without fear, and to see the children play and cause mischief.

To see the life revived in France once more.

Maybe that is the price for the sins I have committed.  Maybe, this is the price to pay for the blood which runs down my blade, like the tears of a thousand casualties.

Some call it war crime.  We call it revolution.

I am Arno Dorian. And I am…